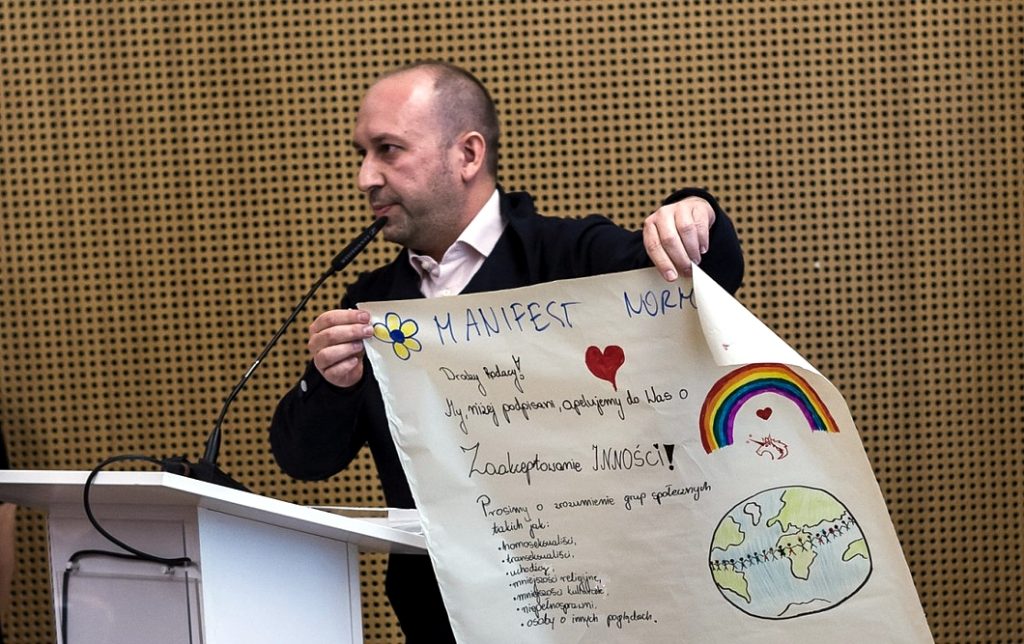 This year the award went to Jakub Niewiński from Murowana Goślina, the teacher conducting antidiscrimination classes, and the “PAFF Leaders” program alumnus.

The winners of the first round of the Award in 2006 were selected by Irena Sendlerowa herself, the woman who during the World War II in cooperation with her partners saved lives of 2,500 children from the Warsaw Ghetto. Among the to-date winners are teachers both from Poland and the United States.

This year the award went to the teacher who for three years has conducted the original, interdisciplinary class educating students in antidiscrimination and human rights. Together with students from Poland, Georgia, Armenia and Malta he organized the “From the needs to the dreams” Intercultural Academy of Openness. He is also a “PAFF Leaders” Program alumnus.

The ceremony was attended by Minister of National Education Joanna Kluzik-Rostkowska, who congratulated both the winner, and the remaining nine teachers-finalists.

She thanked them for their involvement in the issues related to human rights and multiculturalism, and noted that the experience and knowledge of teachers and school principals gathered at the ceremony can play the critical role in work with refugees’ children who soon will be hosted in Poland, as well as with local communities which will host them. This issue was also referred to by a member of the Award Committee and the initiator of the Award Elżbieta Ficowska who is one of the children saved by Irena Sendlerowa: “I and people like me are the living evidence that good exists. We must promote that good. I am absolutely sure that if Irena Sendlerowa was with us, she would be occupied with finding the ways to save the refugees’ children.”

The Irena Sendlerowa Award for Repairing the World has been granted since 2006 by the Center for Citizenship Education and the Association of the Children of Holocaust. The competition is held under the patronage of the Minister of National Education and the Ministry of Foreign Affairs. The Partner in this initiative is the Museum of the History of Polish Jews POLIN.

More about the Award at: http://www.ceo.org.pl/pl/sendler